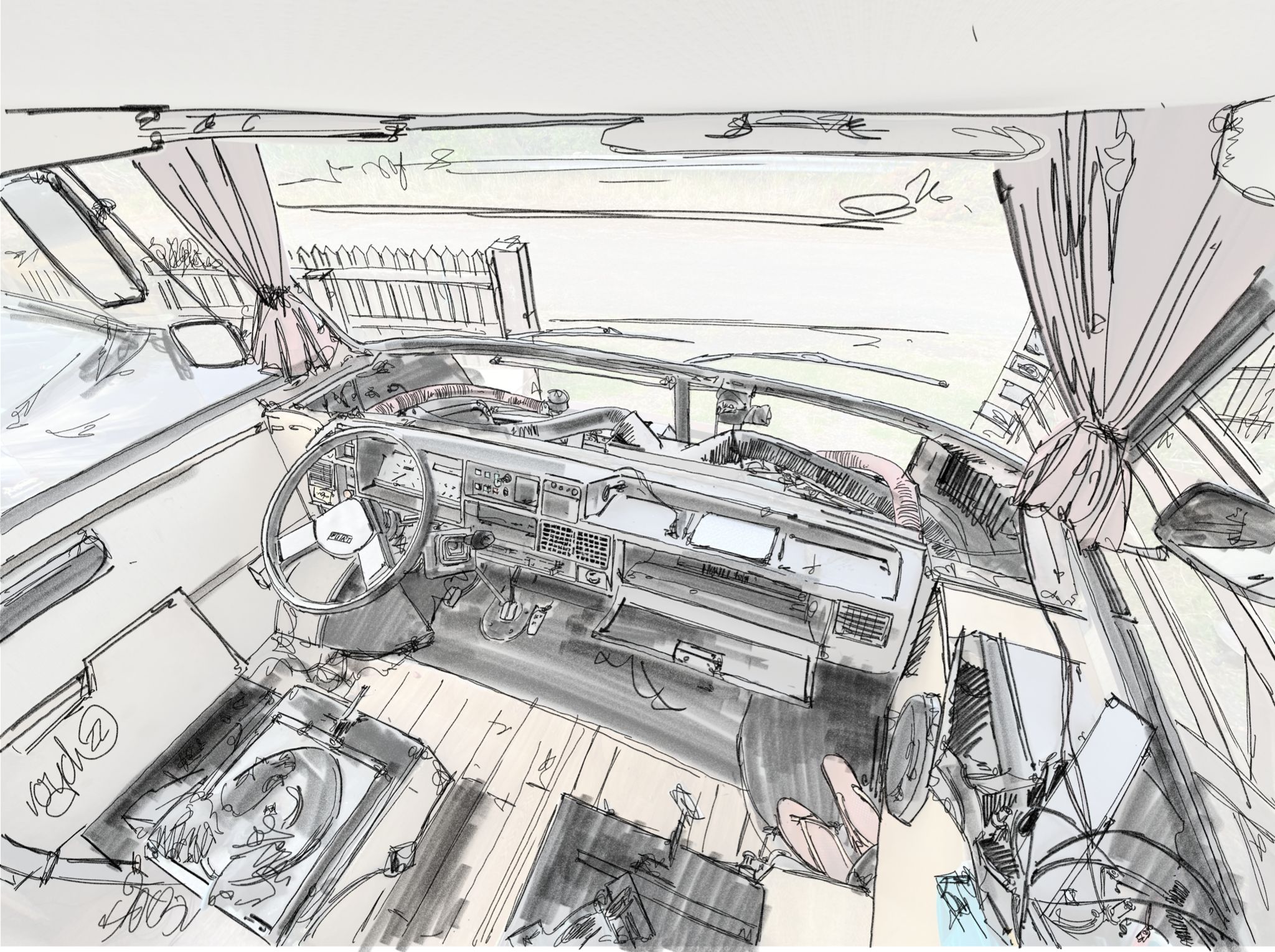 A few days ago I arrived back in the Netherlands and I don’t know what to do with myself. Royden is working his tits off, but mainly on jobs that weren’t on our priority list. I wonder if it’s an unconscious sabotaging mechanism on his side or if these are necessary fixes. It cascades into a whole lot of not so helpful thoughts on my side…

Royden is still at his parents working on our Betsie, while I am in the Netherlands to empty out my apartment (as I ended the lease agreement) and to see a few friends. I have just spoken to Royden and he’s currently working on the wiring. It turns out be a complete chaos and he has no idea just yet how to solve it.

I know I should be immensely grateful that he is working so hard and trying his best to get the wiring sorted, but part of me is irritated and annoyed. It’s been three days now and he still hasn’t started working on the items of our priority list. My mind wonders off into drama… What if there are still many things on the list when I come back? After six weeks of full time work on the van I was really hoping we were getting ready to start our journey, but if this continues the way it does, we might need another four weeks and I don’t think I can do that. I really don’t want to end up in the same situation again, where I feel trapped in England with nowhere to go.

When I speak to Royden the next day, he’s still working on the wiring. He keeps researching and figuring out what on earth they have done to it and mainly how to resolve it. He has already downloaded several manuals, but hasn’t found the correct information yet. Giving up is not part of his wiring, but I have to admit it’s driving me up the wall. In my mind the whole situation goes from bad to worse and I’m getting more and more worried that none of the jobs on our priority list will be done by the time I come back… And that pisses me off.

At the same time I think I’m incredibly ungrateful for even having these thoughts. Especially because Royden works so incredibly hard. He puts in 16 hours a day. But I seem to be unable to stop my mind and thoughts are flying around: Is this really necessary? Is Royden getting caught up in his autism and perfectionism? Is he unconsciously sabotaging things? My thoughts are absolutely not helpful and they don’t show any confidence in Royden either. I try to be kinder, but it’s not easy.

Clearly, something inside of me is triggered and I project it all onto Royden. That is totally unfair and I need to feel what’s going on, but I seem to be unable to do that. I am great at distracting myself as to not having to feel what’s really going on.

Thanks to the space I’m given in the ZOOM call that evening, I can feel what’s going on. But there is a huge fear inside of me. A fear that finds it incredibly scary to share what’s happening inside of me. At first I can’t find the words, but when I sink a little deeper I feel that I am terrified to share that I simply don’t know. That I have doubts about my decision of leaving everything behind to live in a motorhome. That I don’t even know if Royden is the right man for me. That I find it all just very complicated, difficult and tough.

The fact that they just listen helps me to unravel what is going on. My alter-ego is once again terrified of what I’m doing and she tries everything she can to keep me safe. Well-intentioned, but not very helpful. I recognise her from earlier challenging moments in my life, when I followed my heart. It elicits a deep fear of being left all alone with no one who loves me. It is a terrible and lonely feeling and I understand now why I didn’t want to go thee. I also realise that it is a fear, a very unpleasant thought, but not real either.

It also shows me that the past few weeks have been difficult for me and have enacted old patterns. I see how difficult the situation is for Royden, that old traumas are triggered and that he becomes emotionally unavailable. As a response I step into an old pattern: I swallow my tears, take up less and less space and loose myself…

The thought of going back next week and stepping into the same pattern terrifies me. Because I can loose myself again and that’s really the last thing I would want. I understand where my fear came from. The words ‘Never let yourself down again’ fly through my head. Wise words from my dad that I received shortly after his death. Wise words to put into practice.

When I wake up after a night’s sleep, it is very clear. The situation I am in is not happening against me, but for me. There are valuable lessons in doing it differently this time. As in: not to keep quiet, but to express myself, as scary as that may be for me. And so I can suddenly see the whole situation with different eyes: as an opportunity for growth.

Wow, the energy is flowing again. My love for Royden is bigger than ever. I can listen to his stories again with admiration. He has repaired the wiring, and has started ticking off the boxes of all other things on our list. I feel the desire to be with him.

Eight more sleeps, then I’ll be back in England. Reunited with my great love and my greatest challenge.