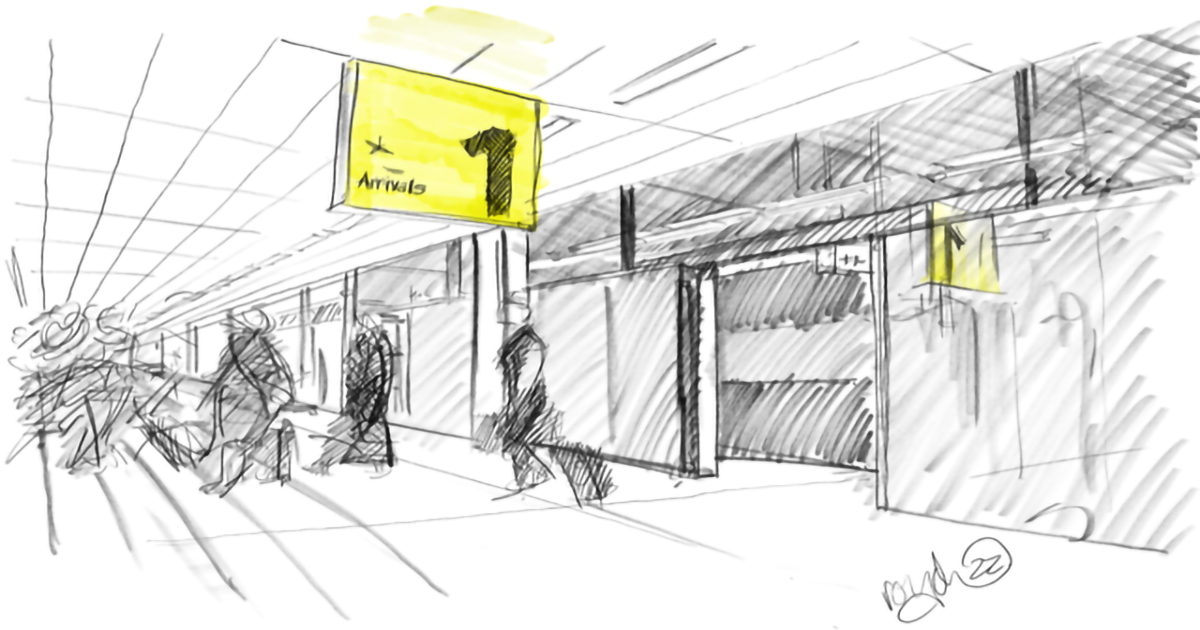 It is early January when Royden and I chat via FaceTime. I am in the Netherlands. He’s in England. I never understood the depth of the love I feel for this man, but for some reason we weren’t meant to be in each other’s lives. Until today. Four years after our goodbyes at Dubai airport.

Tonight Royden arrives at Amsterdam airport.
I am nervous.

“What would it be like to see him again?”
“Will I still find him attractive?”
“How does it feel to hold each other?”
Questions that run through my head as I wait in the Arrivals hall. I try to concentrate on the passengers coming through the sliding doors. It seems like all passengers exit through this one single door. My nervousness rises.

After half an hour Royden steps through the doors. I recognise him immediately. He’s a bit heavier and has a few additional grey hairs, but the smile on his face when he sees me is  as beautiful as I remember. He drops his bags and grabs me tight. It is a hug that says it all: ‘I will never let you go again.’ For a moment I forget the world around me. I didn’t know I had missed him so much.

It is Royden’s first visit to the Netherlands. He looks amused at how organised life in Holland is. The neatly laid out cycle paths, the teeming cars that merge effortlessly in and out, the clean streets, the recycling of our waste.

He stays longer than the ten scheduled days. He discovers a love for farmhouse cheese, we eat the tastiest chips at De Frietkamer in Haarlem and he tries to learn a few words of Dutch. It feels more familiar than I could have ever imagined. Royden also discovers Marktplaats and just before his return to England he finds an awesome motorhome for sale. He’s totally in love.
“Shall we go and have a look at it?” he asks.
I don’t know. I keep talking about living in a tiny house, but a camper van?
“Head or tail?” Royden asks me. A method that we used back then when we had to make a decision.
“Head,” we both say in unison.
He tosses the coin up in the air and catches it. I look tensely at his hand where the coin lands.
It’s head.
“Ah, I was afraid it would be,” I say with a smile.
That’s the beauty of flipping a coin. If you feel disappointed with the outcome, you also have your answer.
I make an appointment for a viewing.

Just having a look…
The mobile home is a Hymer from 1987. It reminds me of the truck that my grandfather used to drive in his days as a milk deliverer. Through the door behind the passenger seat (the only door the camper van has) we step years back in time. Fifty shades of brown smile at us. A throw covers the upholstery of one of the benches in the seating area. No idea what it’s hiding, but it gives the area a friendly look.

“The heater doesn’t work,” admits Martijn, the salesman of the motorhome.
“The air conditioning, on the other hand, does,” he continues with a smile on his face.
He switches on the 70s lights. Cute, but a bit too bright for it to be adding any ambiance. The bed above the driver’s seat is cleverly manufactured and comes down easily. The mattress looks very used. At the back of the van is a U-shaped seating area that can be converted into a double bed. That sounds appealing. But we are only looking to get an impression, so I’m not very critical.

When I look at Royden, however, I see that he is as happy as a kid in the candy store and he seems to see the motorhome as a serious option. My
suspicion is confirmed when he asks Martijn if he can look underneath the bonnet.
I look again. The red curtains are cute but strangely enough not all of the same length. The floor at the back needs to be replaced and the yellow carpet that has been used as covering is in urgent need of replacement. But I have to admit; she has potential.

Royden asks if we can take her for a ride. Martijn is totally fine with that and starts the engine. Surprisingly enough, she starts without any problems and Martijn deftly manoeuvres the 6.5 meter long van out of the yard into the narrow streets in the neighbourhood. I see that she has no power steering and changing the gears is done at the steering wheel. I am not too sure about that.
‘But,’ says Martijn when he sees the frown on my face, ‘you get used to it quickly and she drives really well.’
The front window is immense and gives us a fantastic view. A real bonus.

I look at Royden. He’s really serious. I ask what he can say about it mechanically in the vain hope that it might be a breaking point.
‘There are some issues, but I can fix that,’ he says triumphantly.
I’m taken by surprises because we suddenly seem to be faced with the decision whether we are going to buy a motorhome together. That is very soon after our reunion.

Martijn parks the motorhome and Royden and I take another good look. We see some water damage at the back, but that can be sorted. There is a toilet with a shower, the gas burners work and there is more than enough storage space, it seems. I am still taken aback and let Martijn know that I will need some time to think.

Royden and I walk back to my car and I look at Royden. My feelings are mixed. I definitely see us driving around in this bizarre camper van, but I also feel a bit anxious:
“What if Royden doesn’t come back and I am stuck with a car that feels like a whale on wheels?” is the thought that crosses my mind. Four years ago, we interrupted our journey through southern Africa for Royden to finalise his divorce. Things went a little different, however, and I was left with our Landrover in South Africa. I don’t want to go through a similar experience again.

Expressing my fear brings relief. Royden assures me he’ll be back this time. He doesn’t want it any other way. I feel he’s serious about it. I also notice that the idea of going on an adventure with Royden in this motorhome excites me. She suits us. And well, what’s the worst that could happen if I say yes?

I grab my phone.